Rosie Batty AO, author and advocate, has pushed on in an unrelenting pursuit for social change on the issue of family violence. Rosie’s grief and loss, has been expressed in an incredible willingness to speak out, touching the hearts of the Australian community.

After being named Australian of the Year in 2015, Rosie’s life catapulted into the public sphere. For the last few years Rosie has been an outspoken leader and advocate in the campaign to end family and domestic violence in Australia. Rosie has had significant influence on national public attitudes, government initiatives and funding, support services and police and legal procedures related to domestic violence in Australia.

Rosie is acutely aware of the impacts of re-traumatisation of survivors and recently reflected on Grace Tame’s backlash in her tenure as Australian of the Year 2021.

With her new role as ABC’s One Plus One host, Rosie now is highlighting Australia’s other “accidental leaders”. People, like Rosie, that were unexpectedly thrust into public spotlight following acts of bravery or horrific violence. Rosie’s experience allows for unique conversations and shared understanding of grief.

As Rosie continues to strive for change, we’re delighted to announce her support for our partner Target’s upcoming ‘All That She Is’ Mother’s Day Campaign. The campaign celebrates and acknowledges the importance of all women in children’s lives, regardless of their title or role.

As part of the partnership, Target will be releasing new charity tote bags for $15, where $2 of the sales will be donated to support our Bringing Up Great Kids (BUGK) program. We’re thrilled to have Rosie’s support on the campaign, as she believes that this initiative will really help support more families who critically need additional support.

Keep your eyes on Australian Childhood Foundation’s website and social media for the announcement of the limited release bags from April 7. 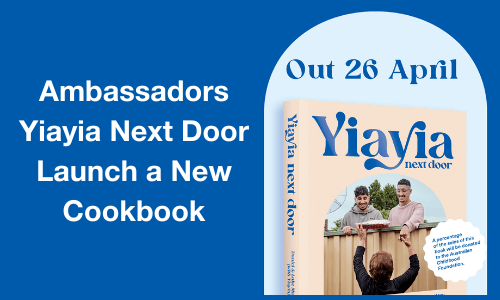 Click Here to Read next: Ambassador Yiayia Next Door Launch a New Cookbook.